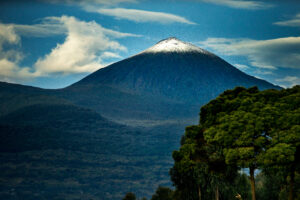 Volcanoes National Park is a national park in northwestern Rwanda. It covers 160 km2 (62 sq mi) of rainforest and encompasses five of the eight volcanoes in the Virunga Mountains, namely Karisimbi, Bisoke, Muhabura, Gahinga and Sabyinyo. The park was first gazetted in 1925, as a small area bounded by Karisimbi, Bisoke and Mikeno, intended to protect the gorillas from poachers. It was the very first National Park to be created in Africa.

Rare mountain gorillas and golden monkeys reside on the slopes of Rwanda’s Virungas, just a three hour drive from Kigali International Airport. The lush slopes of these volcanoes provide a dramatic natural setting for one of the most thrilling and memorable wildlife experiences – seeing the mountain gorilla in its natural habitat. Roughly half of the world’s wild population of mountain gorillas is resident on the Rwandan slopes of the Virungas.It’s no wonder that the number one thing to do in Rwanda is gorilla trekking at  Volcanoes National Park.

Sharing a border with Uganda and the Democratic Republic of the Congo, this national park in Rwanda is home to a growing number of critically endangered mountain gorillas. Experts estimate that there are about 600 gorillas in the park—a significant increase from around 240-250 individuals in 1981. 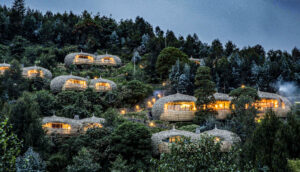 To visit one of the 18 mountain gorilla families that have been habituated to humans, you’ll need to obtain one of the limited number of daily trekking permits. The easiest way to do it is through a reputable tour operator, who can also arrange transportation from Kigali to the park headquarters.

The trekking experience typically lasts between four and eight hours, most of which is spent hiking through mystical bamboo forests, wild meadows, and swampy areas. Guides from the national park service will eventually lead you to one of the habituated gorilla families. You’ll spend an hour observing the creatures as they eat, care for their babies, and interact with one another.

Gorilla trekking in Rwanda is largely considered a safe activity. The gorillas are mostly apathetic to their human visitors. Armed guides, who use a bunch of clicking sounds to communicate with the gorillas, keep guests safe from potential dangers, making the experience one that you’ll never forget.

Porters are available at the base of the trails in Volcanoes National Park. It’s worth hiring one for the day—they’ll carry your bags and help you avoid slipping down the muddy paths.

Want to learn more about mountain gorillas? After your trekking adventure, head to the Dian Fossey Gorilla Fund International Karisoke Research Center in the nearby town of Musanze. It contains a small, yet robust museum all about mountain gorillas and the work of conservationist Dian Fossey, whose efforts to protect gorillas were made famous by the 1988 drama, Gorillas in the Mist. 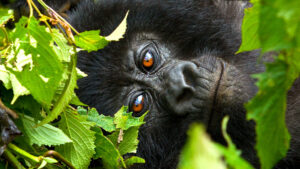 How to get there

Volcanoes National Park is located in a small village called Musanze previously well-known as Ruhengeri, which is very accessible by public transport from Gisenyi or Kigali or from the airport. The drive to Volcanoes national park is 2 hrs and hence one can do gorilla tracking on the same day and drive back to Kigali after the trek. You will be required to arrive at the headquarters of ORTPN in Kinigi, at the park entrance, by 7:00 am, therefore, if you hope to trek gorillas for one day, you have to wake up very early for your journey so that you are on time. However, there isn’t any public transport from Musanze to the headquarters of the park at Kinigi.