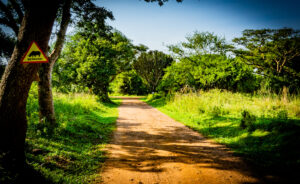 Zziwa rhino sanctuary is a wildlife sanctuary that is home to the only white rhinos in Uganda apart from the zoo. This sanctuary sits on a 70 square kilometers ranch located 176km from the capital Kampala on the Kampala-Gulu highway. Due to poaching, rhinos went extinct in 1982. In 2002, the sanctuary was established and white rhinos were donated to reintroduce the rhinos in Uganda. Disney world, Kenya and European Union donated rhinos and this initiated the process of restoration to multiply and reintroduce these mammals back into their natural habitat.

There are 35 rhinos so far from the 6 that were donated at the initial stage. The Rhinos tread the grass in magnificent detail, some are slow and take deliberate steps, while others make mini attempts to break through the thick grass. They are not afraid to eat anything that comes their way. Due to its close proximity to Murchison falls national park, you can combine your rhino trek with an exploration of Murchison falls national park.

The sanctuary has an amazing array of wildlife. Apart from the 35 white rhinos, the park is home to a healthy number of leopards, antelopes like bush back, duiker, and other aquatic animals like hippos and crocodiles. Primates like black and white colobus monkeys and vervet monkeys are also found in Zziwa.

Rhino trekking is the major activity done at the sanctuary. Here, you get to trek on foot through the grassland as you are guided towards the location of the rhinos. You will have close viewing encounters with the rhinos as they graze. This trek is only available in the Zziwa-rhino-trek sanctuary. Before embarking on this adventure, you need to follow the ranger’s instructions. These rhinos are wild and can attack when they feel provoked. One of the most critical factors that you need to consider while trekking is the safety of the animals. Where necessary you can also avoid walking for long distance by driving to the closest location to the Rhinos.

Through the sanctuary’s guided nature walks, guests can experience the diversity of the natural world within the sanctuary. The walk starts with a ranger guide, who will teach them about the various animals and plants that live in the sanctuary.

Zziwa Rhino Sanctuary is a bird-watching destination that has plenty of bird habitats to offer. The sanctuary houses over 300 bird species, some of which are highly sought after like the shoebill stock. The shoebill is one of the water birds that many birders around the world are looking for. This bird is very likely to be spotted in the swamps of Zziwa. Other birds include; Crested cranes, Red-headed bluebill, Nubian woodpecker, Marico Sunbird and many more.

Zziwa is 176km from the capital city Kampala a 2-3 hour’s drive. The park is a 2 hour’s drive from Murchison falls and can be combined with a wildlife safari to the park. For international visitors, your local operator will arrange transport to the sanctuary.