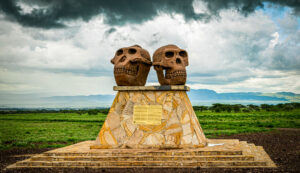 The Olduvai Gorge is an archeological site situated on a series of fault lines, where centuries of erosion have revealed fossils and remnants of early mankind. As early as 1911, a German professor found some fossil bones while looking for butterflies in Olduvai Gorge. In a later expedition, the Leakeys collected skull fragments, a skull, and bones determined to be approximately 2 million years old. Tools and hunting weapons from 1 to 1.5 million years ago were also discovered in Olduvai Gorge.

Another exciting find were the famous footprints of a man, woman and child at Laetoli, near Olduvai. These and other discoveries provide more evidence to the theory that at least three hominid species were in this region over two million years ago.

Olduvai is a misspelling of Oldupai, a Maasai word for a wild sisal plant that grows in the area. The gorge is located in the Great Rift Valley, between the Ngorongoro Crater and the Serengeti National Park. It is 30 miles from Laetoli, another fossil-rich area. Olduvai Gorge was formed about 30,000 years ago, the result of aggressive geological activity and streams..

The steep ravine is about 30 miles (48.2 km) long and 295 feet (89.9 meters) deep, not quite large enough to be classified as a canyon. A river cuts through several layers to form four individual beds, with the oldest estimated at about 2 million years old.