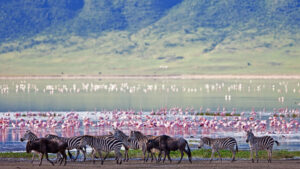 Located between the Serengeti and Lake Manyara, the Ngorongoro Conservation Area is home to the famous volcanic Ngorongoro Crater and is one of Tanzania’s most popular wildlife viewing areas. This huge volcanic crater has a permanent supply of water, which draws thousands of animals who stay in this area rather than migrating.

The Ngorongoro Conservation Area is a UNESCO World Heritage Site that was established in 1959 covering vast expanses of craters, gorges, forests, lakes, rivers, streams, savannah grasslands and woodlands. The stunning combination of landscape and wildlife rivals those in neighboring Serengeti and the Maasai Mara National Reserve. The famous award winning movie “Out of Africa” was partly filmed in Ngorongoro. The Ngorongoro Conservation Area is made up of the famous Ngorongoro crater (from which it gets its name), Olduvai Gorge and the remote crater highlands.

Visitors come here primarily for viewing large animals and bird watching. Thousands of animals can be seen on the crater floor, including lions, elephants, rhinos, Thomson’s gazelles, and buffaloes, but wildebeests and zebras account for over half of the animals that call the Ngorongoro Crater home.

Bird watching is superb, especially around Lake Migadi, which attracts flocks of flamingoes to the shallows. Hippos are content to submerge themselves during the day and then graze in the nearby grass in the evening.

The Ngorongoro Crater is the largest intact ancient caldera in the world, nearly three million years old. The Ngorongoro volcano was one of the world’s tallest mountains before it exploded and collapsed.

The Ngorongoro Crater is often referred to as ‘the Garden of Eden’ because it is a true paradise for animals. The crater is important for global biodiversity because it contains threatened species and high concentration of animals. It is the largest unfilled volcanic caldera in the world. The crater was formed about 3 million years ago when a large volcano (about 19,000 feet) exploded and collapsed on itself. The massive explosion left behind a floor covering an area of 260 square kilometers and 2,000 feet deep. The crater consists of water bodies like Lake Magadi and the Ngoitokitok Spring. The water bodies provide water for wildlife throughout the year but the Maasai herdsmen also use them to supply water for their animals – especially during the dry months of the year.