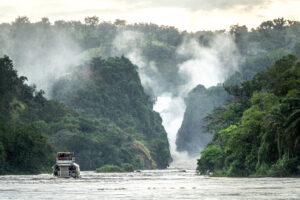 Formerly known as the Kabalega National Park, Murchison Falls National Park is one of the top tourist destinations in Uganda. Home to a variety of wildlife species, the park is bisected by the River Nile forming the most powerful waterfalls in East Africa. Wildlife viewing, boat cruises to the bottom of the falls, hike alongside the falls to the top, birding and fishing are a few of the safari highlights in the park. 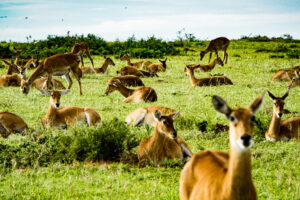 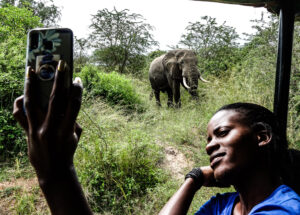 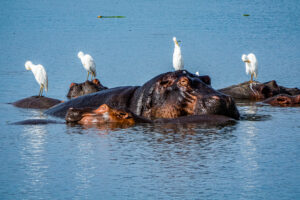 Murchison Falls National Park offers excellent wildlife viewing. 4 of the Big 5 are seen on game drives in the park. However, there are no rhinos in the park. Prides of lions up to 15 strong can be spotted on a morning, evening or night game drive. Impressive herds of elephants, buffalo, Rothschild’s giraffe and antelopes are abundant. The elusive leopards are seen perched on the lower branches of big trees in a bid to escape the afternoon heat. The park is home to chimpanzees in the Budongo forest, Patas monkeys, vervet monkeys, black and white colobus monkeys. The Shoebill, saddle billed stalk, Abdim stalk, African fish eagles, Southern Bishop, Woodland Kingfisher are some of the bird species found in the park. 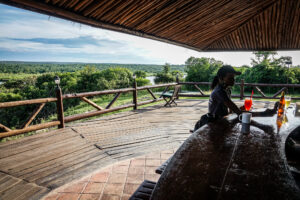 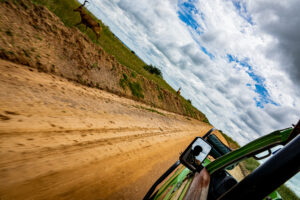 The Nile bisects the park, not only nourishing the park but creating the mighty Murchison falls. Here, the Nile is squeezed through a 7 meter gap creating one of the most powerful falls in the world. The falls are scenic with a relentless rainbow when the sun is out. The Southern part of the park is a tropical forest; Budongo forest which later fades into woodland. The Northern part is savannah grasslands with some patches of woodland.

Murchison Falls National Park sees minimal change in its temperature. It is consistently hot due to its proximity to the equator. Light rain is received in the rainy seasons of March to June and August to November. The temperatures go up in the dry seasons of December to February and June to August.

Like in most savannah parks in Africa, the dry seasons of June to August and December to February are the best time to visit these parks. The short dry grass make it easy to spot the wildlife. Furthermore, animals can be spotted at watering holes where they congregate. However, you are advised to pack accordingly, wide brimmed hats, light clothes and plenty of sunscreen.

The park is located 305km away from the capital city Kampala. This drive takes up to 6 hours including the stopovers. If you are flying in, your tour operator will pick you from the airport and transfer you to the park. The park has an airfield, Pakuba airfield where chattered or scheduled flights land. The hotel can arrange a pick up or your local tour operator will pick you and transfer you to the lodge.