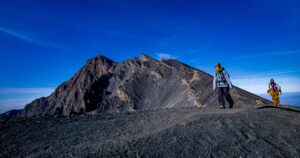 Mount Kilimanjaro is Africa’s highest peak (5,895 m) and Tanzania’s most iconic image. Mount Kilimanjaro National Park, unlike other parks in northern Tanzania, is not visited for the wildlife but for the chance to stand in awe of this beautiful snow-capped mountain and, for many, to climb to the summit. Mount Kilimanjaro can be climbed at any time, although the best period is from late June to October, during the dry season.

Kilimanjaro, a World Heritage Site, was formed over 1 million years ago by volcanic movement along the Rift Valley. Three volcanic cones – Shira, Kibo, and Mawenzi – came to be about 750,000 years ago. The highest point is Uhuru Peak on Kibo, which is one of the Seven Summits of the world.

The mountain rises from farmland on the lower level to rainforest and alpine meadow and then barren lunar landscape at the peaks. The slopes of the rainforest are home to buffaloes, leopards, monkeys, elephants and eland. The alpine zone is where bird watchers will find an abundance of birds of prey.

Although no immediate project is in the works, in late 2020 the government approved a plan to build a cable car on Mt. Kilimanjaro. If constructed, it would take visitors to 3,700 meters above sea level.

Things to do in Kilimanjaro 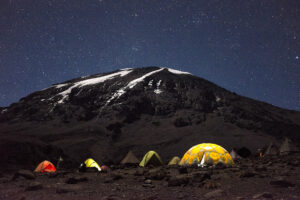 Solo trekkers are not allowed on to the mountains- so you would definitely need a guide. There are various routes, with different views, durations, and difficulty levels, out of which Marangu Route and Machame Route are the most popular. The trek will take between 4-7 days.

If you want to climb to the top of the world, Kibo Peak should definitely be on your list. It’s one of the three volcanoes of Mount Kilimanjaro, and is the highest peak of the mountain and of Africa! Wonderful views are guaranteed all year round and is the only peak which retains its snow throughout the year.

The trek up to the peak can be rather strenuous and is recommended for professional climbers. Don’t worry, though. There are a lot of base camps at the lower levels where you can camp and soak in the views! 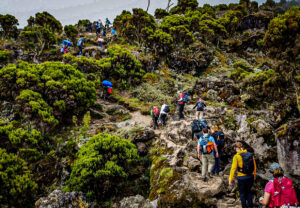 Shira Plateau lies on one of the routes to climb up Mount Kilimanjaro, a few kilometers to the west of Mount Kibo. This stunning plateau is a caldera.

When you walk through the plateau, you’ll be stepping on the remnants of a volcano that expired over 500,000 years ago. This is a beloved place for wildlife enthusiasts due to its extremely rich biodiversity, especially among fauna.

You can take your time and spot elephants, buffalos, elands, and lions in this region- although you should be aware that the area is pretty dense, so you might have to search for views of the animals.

Chala Crater Lake lies in the shadow of the Kilimanjaro, on the border between Kenya and Tanzania in a caldera that was most likely formed after volcanic activity on the mountain. Depending on the time of the year you’re visiting, the clear waters of the lake might be turquoise blue, midnight blue, or even a stunning emerald.

You can go hiking around the lake, down the crater walls, and spot the endangered Chala tilapia that’s only found here. There are some other activities available as well- but during the low season, it will be pretty isolated. There are no lifeguards available- but swimming is also permitted!

Discover the best of culture at Olpopongi, home to one of the most authentic Maasai experiences in all of Africa. You also see the Kraals in which these early settlers have lived in for a long time, learn more about Maasai family traditions and mores, enjoy the local foods, and interact with the Maasai about their heritage!

What makes Olpopongi so unique is that it lets you experience authentic Maasai culture without disrupting their daily lives or intruding into their private homes and villages.