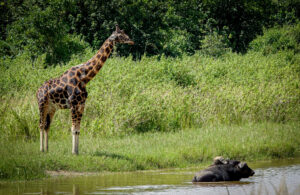 Lake Mburo National Park is one of the smallest national parks in Uganda. Located in the Western part of Uganda, the park is mainly woodland with tall acacia trees that nourish its inhabitants.  The 260 km² is full of amazing wildlife species. These range from the Rothschild giraffes, impala, zebra, hippos, and many more. The park has a water body, Lake Mburo that quenches the thirst of the wildlife. Other aquamarine species in the lake like hippos, crocodiles can be seen on the boat cruise on the lake.

The plentiful wildlife in Lake Mburo offer amazing wildlife viewing. Although elephants, rhinos and lions aren’t present in the park, the big herds of zebra, impala and eland make up for it. Leopards, warthogs, buffalo, olive baboons, oribi, bush backs, reed buck, and many more can be seen on your game drives.

The park is open and receives visitors all year round offering amazing wildlife viewing. During the dry months of June-August and December to February, the tracks are dry and the wildlife gather at the different watering holes. These sights present the chance to see the various species all in one place. In the wet seasons of March-May and September-November, these animals are seen in the open valleys as they graze on the fresh green pasture.

Lake Mburo National Park has a moderate climate with day temperatures of 27°C/81°F and 14°C/57°F at night. Most of the rain is received in the months of August-November and March-May. The dry seasons of June-August and December-February get the least amount of rainfall.

How to get there.

The national park is the nearest park from the capital city Kampala. The park is 236km, a 4 hour’s drive from the city center and 280kms from the airport. You can fly on a chattered or scheduled local flight to Mbarara town from Entebbe airport or Kajjansi airstrip. Then a local guide will pick you up and take you into the park. For international tourists, your tour operator will pick you up from the airport and do the transfers as part of the safari package.