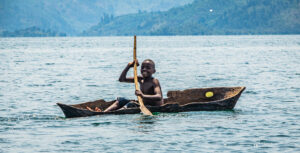 Lake Kivu is one of the African Great Lakes. It lies on the border between the Democratic Republic of the Congo and Rwanda, and is in the Albertine Rift, the western branch of the East African Rift. Lake Kivu empties into the Ruzizi River, which flows southwards into Lake Tanganyika. It is one of the two smallest African Great Lakes, but is the third deepest and sits at the highest altitude. Lake Kivu is located in an area with one of the highest population densities and population growth rates in the AGL region.

Lake Kivu is home to around 28 fish species, half of which are cichlids found only in Lake Kivu. Lake Kivu is the largest local source of fish in Rwanda, providing more than 20,000 tons of fish per year and subsidizing fish imports for animal protein. The fishery supports 500,000 people in Rwanda and the DRC. 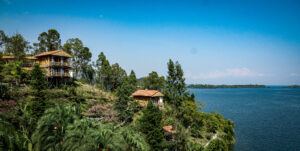 Lake Kivu is one of Africa’s strangest bodies of water. An unusual set of properties make it an intriguing subject for scientists, as well as a potential source of both peril and prosperity for the millions of people living nearby. But Lake Kivu is more than just a scientific curiosity. Its unusual stratification and the CO2 and methane trapped in its deeper layers have researchers worried that it could be a disaster waiting to happen.

There may be a way to turn Kivu’s risk into reward, though. The same gas that could fuel a deadly natural disaster has potential as an energy source for the region. In 2008, Rwanda launched a pilot programme taking methane from the lake to burn as a natural gas and last year signed a contract to export bottled methane. A much larger methane extraction programme, called KivuWatt, came online in 2015

Extraction of the large volumes of methane in Lake Kivu is expected to generate up to 25MW of electric energy but this extraction needs to be done in a safe manner as leaks could harm human health, biodiversity and the climate.

Why you should check it out

Aside from being a geological marvel, there’s no better place to relax in Rwanda than at Lake Kivu. The 2,700-square-kilometer, emerald-green oasis, surrounded by misty mountains, is Rwanda’s largest lake.

Soak it all up from Rubavu, a resort town on the northern tip of Lake Kivu. It has a lively waterfront, sandy beach, and stunning resorts (including the Lake Kivu Serena Hotel). A few days in this peaceful town will leave you restored.

Get even closer to the landscape with Kingfisher Journeys. The tour operator can arrange a stunning sunset kayak trip with singing fisherman on Lake Kivu, as well as multi-day paddling adventures that will leave you in awe. 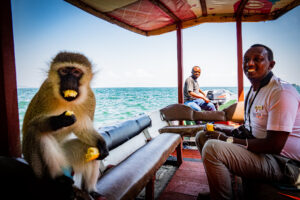