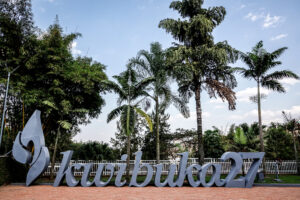 The wall of names is dedicated to those who died and is a work still in progress. Many of the victims’ names have yet to be gathered and documented and many of the victims who rest in the graves are unknown.

The memorial gardens provide a place for quiet contemplation about the history of the Genocide against the Tutsi. They allow visitors to reflect on how we all have a personal responsibility to prevent discrimination and mass atrocity.

It’s hard to imagine that just a couple of decades ago, Rwanda was in the midst of a horrific genocide that would leave more than 800,000 people dead in just 100 days. The country has come a long way from the devastating massacre, but the impact of this relatively recent history has left its mark on the lives of everyday people and generations to come.

Tourists can learn about this horrific event at the Kigali Genocide Memorial. The haunting museum dives into the timeline that led to the 1994 genocide, bringing the horrors to life through halls of photographs, artifacts, and information. The main exhibit hall wraps around poignant sculptures and features stained-glass windows that cast a hopeful glow on the space.

The museum continues with another permanent exhibit on the history of genocide around the world and intervention efforts from international communities, helping to put the Rwandan genocide into context.

The museum also includes an emotionally charged Children’s Room dedicated to the youngest victims of the genocide. It keeps their memory alive through oversize portraits of the children, some of whom were just infants when they were killed, and personal details about the victims, like their nicknames and favorite books.

While heartbreaking, visiting the Kigali Genocide Memorial is an important part of being a responsible tourist in Rwanda. Give yourself time to contemplate the experience and have a moment of silence for the 250,000 victims interred at this site at the memorial’s Gardens of Reflection. 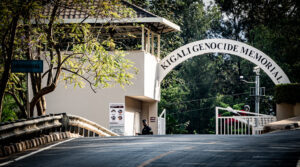 Other Memorials to note

While the largest memorial is in Kigali, the genocide touched all corners of Rwanda, and as such there are many emotionally charged memorials located throughout the country. Some are as simple as a quiet garden space for contemplation, while others are larger and hold relics, remains, and exhibits on the genocide itself.

Beyond the main memorial centre in Kigali, a few of the memorials include:

A small museum lies at the site of the massacre of ten Belgian UN Blue Beret. At the onset of Genocide under the command of General Dallaire, they were deployed to guard the house of Prime Minister Agatha Uwilingimana. When the genocide began, Presidential Guard soldiers invaded the home, disarmed the Belgians and transported them to Camp Kigali where they killed them. The ten stone pillars memorialise the ten soldiers killed.