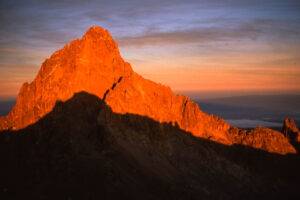 Mount Kenya is an extinct volcano which originally rose an estimated 3 million years ago and last erupted an estimated 2.6 million years ago. Mount Kenya National Park was formed in 1949 and in 1978 the site became a UNESCO Biosphere Reserve before finally being named a UNESCO World Heritage Site in 1997. It is the highest mountain in Kenya and the second-highest in Africa, after Kilimanjaro, and the three highest peaks, Batian Nelion and Lenana are named after Masai Chiefs.

The Mount Kenya trek is a challenging and enjoyable journey to Mount Kenya’s highest trekking peak (Point Lenana) at 4985 metres.  From the summit there is a beautiful view of the dramatic volcanic massif and the two main peaks of Batian and Nelion, as well as long views over the central plains of Kenya. It has long been a popular and very attractive hike through an ancient landscape dotted with glaciers, rock spires, high tarns and some beautiful unique flora and fauna like the giant groundsels and the odd looking rock hyrax which has evolved from the elephant. 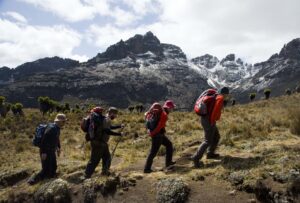 4,985 metres Point Lenana is an achievable trekking peak for most people and if ascended on the Naro Moru route its currently the world’s highest via ferrata, which adds to the challenge and enjoyment. The panoramic views of the volcanic peaks, wide valleys, gorges and surrounding savannah makes a climb on this mountain the perfect African trekking experience.

There are many ways to climb Mount Kenya (including technical climbs on the two higher peaks, Nelion and Batian). Our most popular option is a Naro Moru ascent and Chogoria descent on the Mount Kenya traverse as this gives the best chance to see wildlife and the summit ridge up to Point Lenana from the Austrian Hut is just stunning and a great introduction to mountaineering. The views on the descent are also a highlight looking down towards the gorge, lakes, smaller peaks and immense forest.

The cheapest way to summit is a Mount Kenya trek ascending and descending on the Western side of the mountain, trekking up the Naro Moru route and ascending the Sirimon route. If you’re looking for the easier way to the summit then better to go with the Sirimon ascent as that the final camp at Shiptons is much closer to the summit and much easier terrain to the Naro Moru route.